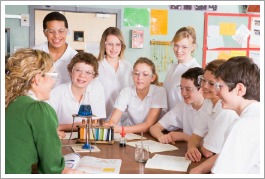 Ask any group of middle school students to make a list of jobs for smart people, and you can bet that “scientist” will top the list. But while those students who consider themselves smart might find this motivating, other students might be inclined to neglect science, as a subject for other people, for scientists.

The National Science Teachers Association warns us that students who aren’t interested in and enthusiastic about science by grade 7 tend not to do well in science through high school.

Is teaching middle school science for me?

Middle school is a difficult time for many students, who are in the midst of significant physical, emotional, and cognitive changes. A middle school teacher has to possess particular insight, patience, and adaptability in order to teach such students, whose abilities and attention vary widely not only from student to student, but also from day to day for the same student.

In elementary school, as students are still developing their language skills, science curriculum begins with very basic concepts, repeating and elaborating upon these concepts as students’ language abilities grow. By middle school, some students are already bored of this repetition, and need to be re-engaged by enthusiastic science teachers who can bring them to the next level.

Middle school science classes have several objectives. Students must be given an overview of physical science, life science, earth and space sciences, and technology. However, these content areas actually come second to teaching about how scientific study works: its basic concepts and processes; how scientific study is conducted through careful observation (with emphasis on the scientific method) and reproducibility; and basic scientific vocabulary (including instruction on roots, prefixes, and suffixes). In addition to these primary concepts and content areas, other components of middle school science instruction include the history of science (focusing on specific scientists) and current social perspectives on science.

Middle school science teachers also help their students develop their reading and writing skills, as inadequate language skills make it impossible for students to really understand the science content. These skills are developed through a variety of means. Students may do three-to-five-page research papers on scientific topics, find and write about current events in science, or simply write a few paragraphs each day about what they learned in class.

Components of the science curriculum:

Lab time is another important component of science instruction. While the amount of lab time in a middle school science class will vary according to school (factoring in budget constraints and limitations created by student discipline), classes are supposed to spend at least 10 percent of the time in laboratory work (and much more, if feasible). Some labs will be “cookbook-style” labs, with students following step-by-step instructions to arrive at a particular result; others are more open inquiry, where students have to apply their knowledge to a given question.

Using what they’ve learned about the scientific method, and applying the skills they’ve developed in lab time, middle school students also participate in a science fair, where each student conducts his or her own scientific experiment, and reports on the results. Science projects are not graded according to whether or not their initial hypothesis was correct, but rather upon how well students applied the steps of the scientific method: Did they make careful observations? Was their hypothesis testable? Was the right variable tested? Did they have a control group? Did they measure correctly? Did they analyze their data? Conducting these experiments helps students to better understand the process of developing scientific knowledge, and can engage students by allowing them to investigate matters that particularly interest them.

Science instruction in 7th grade focuses on the life sciences. Students learn about biological classification, starting with the system created by Charles Linnaeus. They learn how scientists divide life into different kingdoms; and go on to learn about more specific divisions in the animal kingdom. Additionally, they learn to identify similarities between organisms, and how these similarities “relate” animals to each other according to current evolutionary theory.

Steps in the Scientific Method:

Seventh-grade science students also learn about basic cell biology, and how animal and plant cells differ from each other. Inside the cell, they are introduced to DNA; they learn how DNA stores information, how it is used to reproduce cells, and how it transmits information from one generation to the next. Students learn about selective breeding of animals and plants to cultivate specific traits stored in their DNA. Additionally, students are introduced to the concept of mutation as the mechanism for evolutionary change.

After learning about general biology, cell biology, and evolution, 7th grade students also get an overview of human anatomy and physiology. They learn about different systems in the body, and about disease.

Finally, 7th grade students also get an introduction to ecology, learning about how groups of organisms exchange energy and nutrients in their environment.

In the 8th grade, science instruction focuses on the physical sciences. Students are taught about the structure of matter, and become familiar with the periodic table of elements. They learn about the mass and density (weight) of different elements, learn about the conservation of matter (matter cannot be created or destroyed, but only changed from one form to another), and learn about how elements and compounds react with one another to form new compounds with different properties.

Students also learn about energy and the conservation of energy (energy cannot be created or destroyed, but only changed from one form to another), investigating kinetic and potential energy, about heat energy, and electromagnetic energy. They may also investigate simple machines, and how those machines change energy, or exchange distance and force.

Finally, 8th-grade students will also learn about light and sound waves, and how they interact with different materials.

Current job-growth rate (nationally) for middle school teachers is 17 percent, slightly above average for all occupations, and more than twice that of the growth rate for high school teaching positions.

Growth varies by region according to both demographic and political differences (such as the state goals for student-teacher ratios). Enrollment in the South and West is expected to grow the most, while student enrollment in the Northeast is actually expected to decline. Already the demand for teachers in the Southeast and is greater than the supply, while in the Northeast there is a surplus of applicants to the teaching profession. Also, opportunities are greater in urban and in rural areas than in more suburban areas.

Does it pay well?

Salaries for teaching middle school science vary from state to state, depending upon state budgeting and the involvement of the state in federal funding. The median salary nationwide is $51,960—slightly lower than that for high school teachers, and substantially higher than the national median average for all jobs ($33,840). On top of that, public school teachers tend to have substantial benefits packages. Additionally, teachers get about two months of the year off from work (during the summer for traditional schedules, but year-round schools still provide the same time off). Many schools give teachers the option of being paid either on a 10 month or a 12 month schedule.

At schools on a traditional schedule, many teachers get additional paid work by teaching summer school. Another way for teachers to increase their pay is to coach or advise an extracurricular activity, for which they receive a stipend.

Salaries at public schools are often dictated by union rules: pay increases with number of years teaching, and with educational degree. Tenure is available for most teachers after only a few years.

How do I get started?

Most public schools require teachers to possess a state teaching credential. The component requirements of such credential may vary from state to state; but a public school in one state will accept a teaching credential from another state. You can view your state’s requirements at the Teaching Certification website. Some states require their teachers to major in elementary education; others require a college major in the content area they’re teaching. Check your state’s requirements before declaring a major. Most aspiring science teachers will major in their content area, and take most of their education classes as part of their graduate work. While pursuing you bachelor’s degree, you may also need to take courses outside of your content area, such as child psychology or lifespan development.

Many states require continued professional development after obtaining a teaching credential. Some states even require credentialed teachers to pursue a master’s degree.

Every year, hundreds of thousands of students enter high school science classes without the understanding of science that is supposed to be developed in middle school. Middle schools across the nation need competent and enthusiastic science teachers to remedy this. If you have both a passion for science and an enjoyment of this age group, they need you.