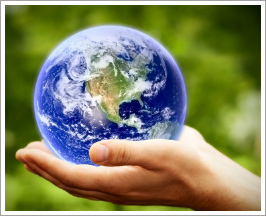 In An Inconvenient Truth, Al Gore warns that much of Florida’s coastline could be underwater before the end of the century. Meanwhile, Florida developers continue building, consumers continue buying houses, and insurance companies (including the Federal Government, through its flood insurance program) continue to insure the houses.

Clearly there’s a difference of opinion on the matter—but what are the facts? We may read or hear news reports about climatologists’ predictions, and then hear of contrary statements from other climatologists; but who are we to evaluate these competing claims? If only there were some way we could learn what we need to know! If only we had teachers who taught environmental science!

In this Article … Related Articles/Websites …
And we do—but not enough. A highly interdisciplinary field, environmental science involves a great breadth of scientific background, and faces the additional difficulty of studying large-scale systems and interactions that cannot be confined to a laboratory experiment. Yet ever since the National Environmental Policy Act (NEPA) of 1969 began requiring environmental analyses of various development projects, businesses have needed environmental scientists; and thus schools will need to equip students for such work. In the meantime, political questions and contests demand better voter knowledge of environmental science, or at least better ability to understand and evaluate competing knowledge claims. All this makes the teaching of this subject extraordinarily important if we’re to make good decisions regarding environmental policy.

What does teaching Environmental Science require?

Environmental Science examines the effects of humans on nature, by applying biology, ecology, chemistry, and the traditional earth sciences toward studying the environment and addressing environmental problems. Building on the earth science curriculum (which includes geology, oceanography, and meteorology), environmental science looks at how the systems in each of these fields operate, how they relate to each other, and how they respond to various inputs and stresses (including human activity).

Because of the vast number of variables in any environmental process, environmental scientists rarely get to do controlled experiments. Instead, they must learn to analyze and interpret vast amounts of natural data, finding correlations and patterns.
Teachers of environment science introduce their students to principles of natural resources management, methods of reducing pollution, means of producing energy, and the influences and impacts of global climate change. Also discussed are historical examples of environmental disaster (such as major oil spills), major events in the history of environmental discourse (such as the 1962 publication of Silent Spring), and changes in historic environmental concerns (such as Paul Ehrlich’s Population Bomb and the global cooling scare of the 1970s). It is a highly politicized field—but also a hugely important one. Lack of knowledge about environmental issues leads to bad environmental policy decisions, on both sides. We need teachers of environmental science who are passionate about equipping students with the knowledge base and reasoning skills needed to approach these high-impact questions—and who have the character to teach such a subject without making it perversely political, or taking advantage of students’ ignorance to promote their own political visions. Environmental science teachers at universities divide their time between teaching and research, while those at teaching colleges have more classes with little or no research responsibilities. Teachers responsible for research may also be responsible for obtaining research grants, and typically are expected to publish some amount of peer-reviewed work on a regular basis. And again, environmental science also requires knowledge (and instruction) in a variety of other scientific disciplines:

Since addressing environmental problems involves changing human behavior (often through public policy), solving such problems also requires an understanding of both economics (allocating limited resources among unlimited desires) and law. But with only so much time in a semester, and so much science to teach, the economic aspects of problems and solutions are often neglected. Accordingly, the primary goal for teachers in this case is to teach students how to handle the scientific data, and how to evaluate the claims—and not skip over this to “solutions” that exist only in the classroom, which only convince students that they don’t need to bother with learning the other subjects.
A basic component of earth science classes, geology is the study of the earth’s land. Students of basic earth science learn about the rock cycle, fault lines, and about erosion and weathering. Environmental science students build on that knowledge, learning about soil science, sediment transport, and impacts of pollution.

Another basic component of earth science classes, meteorology is the study of the earth’s weather. Students of basic earth science learn about the water cycle, cloud formation, and kinds of weather. Environmental science students build on that knowledge, learning about the historical weather patterns in specific regions and across the world, the effects of human industry on weather, and about dispersion patterns of chemicals introduced into the atmosphere. This is also where most of the data pertinent to the global warming debate is studied. Students learn about the effects of cloud cover on temperature, about variations in solar activity, about greenhouse gases—methane, carbon dioxide, and (most significantly) water vapor—and about plant and animal contributions to the atmosphere. Environmental scientists also develop computer models of atmospheric circulation and heat transmission—and careful teachers explain to students the strengths and limitations of such models.

The study of the earth’s oceans includes an introduction into marine biology (a rapidly-expanding field of science, and the primary location of those new species currently being discovered), discussion of pollution issues (including the problems of international responsibility for the oceans), and the role the ocean plays in maintaining the earth’s global temperature.

Ecology is the study of how organisms interact with their environment. It examines population growth, and how populations respond to various environmental pressures. Additionally, it examines the inter-relationships between species, including predator-prey relationships and the effects of apex predators upon biodiversity. Ecological study also identifies keystone species for different ecosystems, and develops means of measuring the relative “health” of different ecosystems. An important aspect of ecology is examining the ability of various ecosystems to sustain themselves, and to respond to stresses from human activity. Now a staple of business development in the United States, the environmental impact report is based upon such understandings of ecology—which continue to be revised as we learn more about different ecosystems. The expert teacher of environmental science must keep up with these advances in scientific knowledge, so that students learn how to best evaluate different effects upon specific ecosystems, instead of reverting to outdated assumptions (for example human population growth and agricultural output have both performed entirely differently from the predictions of Ehrlich in the 1960s—who was using reasoning employed in the previous century by Thomas Malthus).

Since environmental scientists study the impacts of humans on the environment, they usually have some social science background as well, for studying human institutions (sociology) and freewill market transactions (economics). Additionally, they need some knowledge of environmental law, and of policy process for administrative agencies. Finally, computer science skills are employed in developing models of climate change, and in testing theories that cannot be tested in the larger world (since the earth cannot be put into a laboratory).

As high school science curriculum is devoted to the prerequisite sciences (physical science, biology, chemistry, and physics), environmental science is taught not in high school but in college. Colleges and universities employed almost 5,000 environmental science teachers last year, showing an 8.6 percent growth in that field (for comparison, high school teaching grew by only about 7 percent). New York, Pennsylvania, Arizona, Ohio, Indiana, and the Los Angeles-Long Beach area of California had the greatest number of opportunities. Environmental science teachers are expected to possess a thorough understanding of physical geology, of meteorology, and oceanography. Additionally, they need to understand biology and ecology, with an emphasis in ecosystems; as well as chemistry, used to analyze soil, pollution, and industrial outputs. Pursuing a career in environmental science involves pursuing a comprehensive survey of the sciences, and continuing education as this field develops. A Ph.D. is required for teaching at most accredited four-year colleges and universities; some community colleges may accept faculty with only a master’s degree, so long as the teacher is working toward his or her doctorate. However, teaching and research assistant opportunities are available to those pursuing their higher degrees. Graduate students are often involved in research projects, helping established environmental scientists with their research and teaching loads.

The average mean average salary to environmental science teachers at colleges and universities is $84,140 (median average $75,050). It’s also worth noting that colleges, universities, and professional schools paid nearly 50 percent more on average than did junior colleges.

How do I get started?

In addition to teaching at the post-secondary level, those with knowledge of environmental science have additional opportunities to teach at the high school level. In high school, teachers will typically not have environmental science classes per se, but they will teach physical science, biology, or chemistry, introducing high school students to the fields that undergird a study of environmental science. You can review specific high school science credentialing information and state specific teaching certification requirements. Most states have established programs for single-subject science credentials; but alternative avenues are also available for competent teachers possessing a bachelor’s (or higher) degree (learn more about alternative routes to teaching certification). If you have a passion for the subject, the rewards of a career in teaching environmental science are well worth the effort. Meanwhile, the world needs you—because without you, the greatest environmental issues of our time will have to be decided out of ignorance, based upon rhetoric and the charisma or politicians, instead of upon an understanding of our earth.