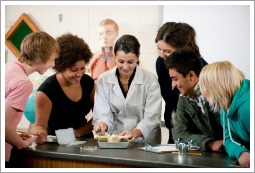 What if we lived in a world where cancer didn’t exist?

It might sound like science fiction, but consider that at one point in the past, a disease like smallpox was so devastating that it killed nearly 400,000 Europeans each year near the end of the 18th century. At that time, if someone asked you to imagine a world where smallpox didn’t exist, you would probably react in a similar way as you did to the question about cancer.

In this Article … Related Articles/Websites …
However, advances in medicine and science helped to defeat smallpox; the World Health Organization announced its eradication in 1979. Is the world really so far off from defeating other serious diseases and illnesses that plague us today? Thanks to the biologists and the biology teachers who inspired them, these scenarios are becoming more realistic by the day. The Field of Biology is constantly striving toward the understanding of all organisms, from the smallest cells to the largest mammals. By advancing the understanding of the building blocks of life, biology teachers help to pave the way for new medical discoveries, improvements in the quality of life, and a greater understanding of how the world works.

A world without biology teachers?

In biology, scientists classify organisms by a strict system. Biology teachers help students to break down this system, giving them the foundation they’ll need to advance in the subject. The system can be read as a top-down classification system, with each subsequent area fitting into the larger one.
Much of the biology field is concerned with studying cells and how they interact in everyday life. A world without biology would mean a world where we didn’t understand how diseases and cells interact, leading to large demographic shifts in society. People would die sooner from diseases or complications related to malnutrition. For example, prior to the 1800s, average life expectancy in England was between 45 and 50 years old. At it’s worst points, a male living in England during the black plague had a life expectancy of 24 before succumbing to disease. Without an understanding of biology, humans would need to rely on vague understandings of how life, animals, plants, cells, and bacteria work. In the Middle Ages, many people thought that disease and illness were the result of an angry or vengeful god, wishing to punish someone’s transgressions. Most scientists had crude knowledge of how the body worked as well, leading to complications in the treatment of diseases. For example, many people still believed that illnesses occurred because of imbalances in four bodily “humors,” consisting of blood, phlegm, black bile, and yellow bile. “Curing” someone involved balancing the humors by draining those in excess, such as using leeches to drain blood. It wasn’t until the Renaissance that scientists began to re-examine their understandings of how the body worked. Additional research on disease and life biology led to scientific breakthroughs in the treatment of illness. In 1665, the cell was discovered, causing scientists to examine life as never before. Research into how disease spread and multiplied helped to prevent future outbreaks in the population. Eventually, this led to cures, vaccines, and treatments for widespread diseases like rickets, yellow fever, syphilis, malaria, and smallpox. If biology had never developed, these diseases would still likely be rampant and still destroying society. Without the help of biology teachers, we would also have difficulty classifying all of the different plants, animals, and various cells that make up life on the planet. Biologists have developed a complex, yet accurate way to classify organisms, leading to greater understanding of how life is related. This classification helps scientists pinpoint certain plants or bacteria that might have medicinal benefits – or complications. Without an understanding of how to classify plants, people could never be totally sure whether a plant was poisonous and would kill them, or if it was safe to eat. Biology teachers also help pass on knowledge of how the body breaks down food into nutrients and energy that sustains us. Greater understanding of nutrition has allowed humans to live longer, healthier lives. Overall, life without the knowledge of biology teachers would be much harder and dangerous than it is today. Research in the field has led to widespread cures for disease, and has extended the average life span of a human being. Thankfully, today biology is a widely-taught subject. In 1881, the first general biology class was taught in Milwaukee, Wis., though at the time it was known as “natural history.” By 1893, the subject became a recommended part of the high school curriculum in the country. Biology teachers help to give students a first-hand look into the complex features of life that were at one point unknown to the general public. By advancing this knowledge, biology teachers help to continue the human tradition of discovery and exploration.

While breakthroughs in medicine and disease have been the direct result of discoveries in the Field of Biology, a student’s understanding of biology typically begins with the concept of classification. Biology is the study of all organisms on the planet, and considering the large amount of organisms, there needed to be a standard way to classify these organisms. One of the major contributions to science, the modern biological classification system, has enabled humans to group plants, animals, and all known living organisms. This classification system allows students to gain a deeper sense of exploration – a key trait for future biologists. Throughout their lives, students develop attitudes and expectations about various objects and organisms around them. When they discover that scientific outcomes do not meet these set expectations, they want to know why. Biology teachers harness this natural curiosity and help students to explore these scientific outcomes through in-class discussion and laboratory work. Constituting a major part of most modern day biology classes, lab work gives students a chance to put their class material to test in hands-on experimentation. In lab, students investigate problems, ask questions, and develop responses and solutions. In high school, biology class typically centers around learning about the basic functions of the organs that make up organisms. For example, students might dissect pigs in class to learn about organs in mammals. Interestingly, pig organs are remarkably similar to human organs, giving students a look at the functions of the various organs that make up a body. This basic biology exercise gives students ample learning experience, and spurs students to continue their scientific pursuits. In fact, this particular lab experiment might lead to scientific breakthroughs in the near future. Scientists are looking more toward the similarities between pig and human organs, examining how pig organs might even be used to help humans. For example, scientists are estimating that by 2013, the cornea from a pig’s eye might be transferred to a human with sight problems.

What do students study in biology?

Biology teachers help students understand a number of complex scientific concepts. Some of these subjects include:
In the past, the Field of Biology has had an integral role in defeating infectious diseases and illnesses, and will play a similar role in the future. Biology teachers help to train a new generation of scientists, and must nurture their curiosity for discovery. Biologists today are conducting research and examining some of the most pressing issues of our time, such as cancer and Alzheimer’s Disease. Our understanding of the human body and the relationships between cells, bacteria, and viruses will continue to advance our knowledge in these areas. For example, cell biologists have discovered large links between genetics and susceptibility to colon cancer. DNA from cancer tumors has shown that 40% of these tumors resulted from a mutation in a specific gene (“High School Biology Today and Tomorrow” from the Committee on High School Biology Education pg. 33). This knowledge has helped lead to variations on cancer treatment, helping to find the best way to defeat colon cancer. But these scientific discoveries can’t continue without the support and knowledge of our biology teachers. Many people first become interested in the science field during school, so more teachers effective at driving students to success are needed. If you’re interested in a career helping students discover their love of science, consider requesting information from schools offering degree programs in biology.

When Jane Goodall arrived in modern-day Tanzania in 1960, she had no idea how her future work would impact the world of science and our understanding of primates. Goodall, a zoologist who specializes in primates, had been tasked with learning more about the lives and habits of chimpanzees. Up until this point in time, scientists had only limited understandings of how chimpanzees interacted with each other, and wanted to learn more about possible evolutionary links between chimps and humans. What Goodall found would captivate the world. Goodall observed chimpanzees in Gombe Stream National Park, discovering some surprising aspects of individual chimps. Unconventionally, Goodall named her observed primates instead of simply numbering them. She also began to note differences in personality and action that set the chimps apart from each other. For example, the chimp Gigi was known as very nurturing, acting as an “aunt” for other younger chimps. Goodall also found traits of chimpanzees that would challenge commonly accepted ideas about human behavior. For example, at the time, humans were thought to be the only organisms on Earth that used tools. Goodall’s observations showed that chimpanzees sometimes took long blades of grass, inserted them into termite mounds, and then sucked the termites off of the grass. This “fishing” for termites had profound effects on the world’s view of primates, and showed additional similarities between humans and the chimpanzees. Additionally, Goodall found that each of the chimpanzees had separate personalities and interacted with each other differently. She observed chimpanzees interacting in separate social groups existing within the larger community, and that these groups sometimes fought and killed each other. At a time when the habits of primates were not widely understood, Goodall’s work changed the way biologists saw human/chimpanzee relationships. Goodall eventually came to be an almost accepted part of the chimpanzee community, until an alpha male drove her off. Today, Goodall champions preservation and conservation efforts to help protect the chimpanzee population. Thanks to Goodall’s efforts, people around the world have gained a greater understanding of primate/human interaction, and consider theories of evolution with greater interest.