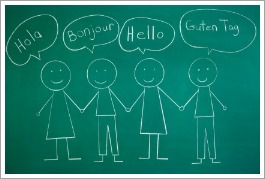 According to a large body of research, you’ll not only accomplish your original goal, but you’ll also benefit your students in an unexpected number of ways as well.

In this Article … Related Articles/Websites …
Research compiled by the National Education Association shows that students who learn a second language, especially at a young age, receive educational benefits that go far beyond merely knowing a second language. Children who learn a second language, on average, outperform their single-language peers in core curriculum subjects (math, reading, English, and social studies) as well. Foreign language students generally understand language better and gain insight into its structure. Students who study languages with Latin roots tend to grasp the meaning of new English vocabulary more quickly. The academic prowess of bilingual students shows up on standardized tests such as the SAT, as they consistently score higher than other students. Studying a foreign language has been shown to benefit disadvantaged children who struggle to achieve in their other academic studies. The performance gap between these students and average children is reduced, since learning a foreign language doesn’t rely on previously mastered verbal skills. Disadvantaged children often find themselves earning test scores similar to their peers, providing them with a source of self-esteem. Students who study foreign languages also find themselves exposed to new cultures. This builds a sense of empathy and cross-cultural competency in children, as they begin to understand and grow in curiosity toward a new people group. Foreign language teachers, quite literally, introduce their students to a whole new world.

Scholars have organized languages into four main divisions: Spanish: This includes Spanish Creole and Latino. Other Indo-European Languages: This includes all of the remaining European languages including Slavic, Germanic, Romance (other than Spanish), and Iranian languages Asian and Pacific Languages: All other languages: This “grab bag” category includes Uralic and Semitic languages, and several languages indigenous to the Americas and Africa.
And some of that world is in students’ own backyards. According to US census data, just fewer than 20 percent of Americans speak a language other than English at home. Sixty-two percent of those people speak Spanish or Spanish Creole; another 15 percent speaks an Asian language, such as Korean or Chinese. Therefore, especially in the Western portion of the country and certain urban centers, English speaking children have the opportunity to use their newly acquired language skills with their friends. According to the projections made by the Pew Foundation, America will continue to grow in its racial diversity. If current trends continue our population will swell from 296 million in 2005 to 438 million in 2050. 82 percent of this projected growth will come via immigration. Nearly one in five Americans will be a first-generation immigrant in 2050 (compared to one in eight currently). The Hispanic population is expected be to the fastest growing population group. This population is expected to triple in size and comprise roughly 29 percent of our total population. This diversity makes it even more important for our workforce to be bilingual. Many employers in careers including social work, health care, flight stewards, and bank tellers are finding it necessary for its workforce to be bilingual to meet the needs of its diverse customers. Additionally, many companies have globalized work forces with offices overseas. Workers who have mastered a second language find themselves with increasing work opportunities, and often at increased wages. But first, someone has to teach them the language.

As a foreign language teacher, you’ll be doing more than teaching vocabulary and grammar to your students. You’ll also introduce them to the culture and history of the countries in which the language is spoken. You’ll also have the regular duties that come with being a public school teacher. You’ll prepare lesson plans and grade papers. There will be parent-teacher conferences and administrative meetings. You’ll also work with teams to acquire language materials for your classroom. You’ll plan occasional cultural events related to your language, such as ethnic dinners or simulation exercises. Foreign language teachers can expect to be resourced with a basic curriculum and can find a nearly unlimited supply of online forums and lesson plans that can be downloaded and adapted to enhance the session and meet the needs of your particular students. Many school districts are afforded the luxury of a local Intermediate Unit that regularly provides specific training to foreign language teachers. Annual state-wide training is usually offered for foreign language teachers, although budget constrictions make it difficult for all districts to send their teachers. Some foreign language teachers report that since foreign languages are electives and not required courses, classes are not adequately resourced. A teacher might be outfitted with a curriculum that includes a strong online component but simultaneously teachers in a classroom may be without computers. Others report budget constrictions making it impossible to take their students out for enrichment activities in the surrounding Hispanic community. Additionally, pressure to have the students achieve on standardized testing causes many teachers to emphasize grammar and vocabulary over cultural activities.

According to the Bureau of Labor Statistics, the average mean salaries range between $53,000-$65,000 annually, depending on the region of the country, the employee’s qualifications, and the type of teaching institution hiring. Generally speaking, higher grade levels will be rewarded with higher pay. Foreign language teachers can also increase their entry-level salaries—by about 15 percent on average—by possessing a master’s degree.

What Foreign Language Should You Learn/Teach?

Ultimately, you should choose a language for which you have a natural passion. You’ll be working in this career, hopefully for a lifetime. However, it’s also important to realize which languages are in demand. According to the US Census Department, nearly 55.5 million individuals speak a language at home other than English. The top four are Spanish, Chinese, French, and German. According to the journal Ethnologue, the most spoken languages worldwide are: Currently, the four foreign languages taught in the United States, in order or prevalence, are Spanish, French, German, and Latin. Spanish instruction is on the rise, while French is on the decline.

How do I become a Foreign Language Teacher?

In order to become a foreign language teacher, you’ll need to master the language you wish to teach, which will require a bachelor’s or master’s degree in that language. Additionally, you’ll meet your state’s requirements to become a public school teacher. Every state demands that teachers hold a least a bachelor’s degree in education. In addition to academic work, future teachers are also exposed to field work such as student teaching, to put their newly developed skills into practice. Many states also require continuing education after licensing; in many cases, this includes the requirement to earn a master’s degree. In addition to basic teacher certification, several states require that foreign language teachers become certified to teach their particular language. Several states also require teachers to pass a written Praxis examination before being permitted to teach that foreign language. Be sure to check your state’s requirements, at the Teaching Certification website. Those who make teaching a foreign language a career help prepare students to become global citizens. The satisfaction they experience in watching students embrace a new culture, even as they increase their language skills, is worth the effort. And in an increasingly globalized society, that work is more important than ever.